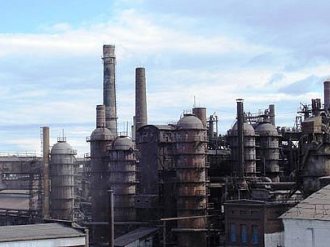 On January 17 of this year the Belarusian Metallurgical Plant put into operation the reconstructed objects of the electric steel-smelting complex, in particular the dust-gas catching unit No. 1 ("PGU-1") and the steel-smelting arc furnace No. 1 ("DSP-1"). These objects are the most important positions for , since the reconstruction works carried out with them will enable to increase steel smelting, and the production process will be more "clean" in the ecological plan and more economical.

Reconstruction of the objects "PGU-1" and "DSP-1" was carried out within the framework of the development program, the final stage of which is to be held in 2015. The main goal of the project is to increase the annual production of steel to three million tons, as well as to move away from the sale of cast blanks, processing them later in products with significant added value.

At the moment, there are three steel-smelting arc furnaces at the Belarusian Metallurgical Plant. "DSP-2" and "DSP-3" have already been upgraded earlier, as a result of which their productivity has increased to one million tons of steel per year. Conducted the same reconstruction, as a result of which the hydraulics "DSP-1" was improved and oxygen technologies were put into operation, will allow to continue the growth of the indicators. In addition, the consumption of electricity, the consumption of electrodes and the operating time will be significantly reduced, and the quality of the product will increase. In turn, oxygen technologies make it possible to improve the energy efficiency of steel production by 8.5%, correspondingly, the specific energy saving increases, making at the same time 5.25 USD per ton, which will give 4.977 million USD for the year.

The performance of the furnace will also be positively influenced by the management system, modernized within the framework of the reconstruction, which will enable to reduce the prime cost of smelting of liquid steel. The new equipment will increase the reliability of the system for a period of not less than 10 years, in addition, new CCGT-1 systems and gas-oxygen technological processes, as well as reconstructed hydraulics and a new transformer protection system would not have been possible without the introduction of a control system operating on The basis of "Simatica S 7". For "DSP-1" this reconstruction is already in the third time. At the same time, the total cost is more than 23 million USD.