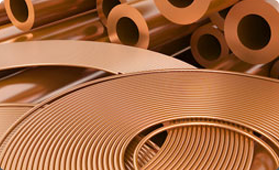 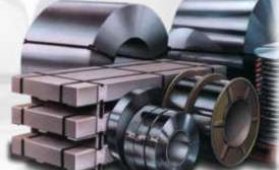 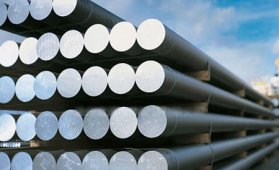 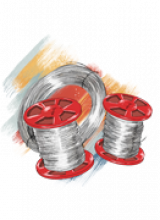 The unique ability of molten nickel to dissolve any metals with the formation of solid solutions, while retaining its dignity, led to the creation of hundreds of N. s. Their useful properties are due to the qualities of the nickel itself, among which ferromagnetism is distinguished, high corrosion and thermal stability, the absence of allotropic transformations.

Alloys containing about 50% Ni, with copper or cobalt additives, do not differ from the glass by the thermal coefficient. This is important when a sealed joint is required between the glass and the metal. If Co in the composition of 4 to 18%, then such Ni alloys become magnetostrictive materials. Due to good corrosion resistance, such alloys are used for hydroacoustic equipment. Another 100 years ago it became known that the heat resistance of Ni can be improved by additives of Al, Si or Cr. The nickel alloy with Al, Si and Mn is called alumel, and the Ni alloy with 10% Cr is chromel.

Chromel-Alumel thermocouples are the most popular in industry and laboratory engineering. Thermocouples from chromel and copel are also relevant.

An important role in the technology is played by alloyed Ni-Cr, Ni-Mo and Ni-Mn alloys. Molybdenum and manganese give the nickel alloys valuable electrical properties: high electrical resistivity, low coefficient of thermal expansion, small thermo emf paired with copper (less than 5 mV / ° C). The main area of application of such alloys is small-size resistors, which require the constancy of electrical properties over a wide range of temperatures. Such elements are made of micro-wire or tape with a thickness of 5−20 microns. Alloys based on. They are characterized by an almost linear dependence of the change in electrical resistance and the value of elastic deformation.

Heat-resistant Ni + Cr alloys — nichromes are widely used in electrical engineering. The most popular nichromes with 80% Ni, which before the advent of chromales, had practically no alternative.

The percentage composition of alloy nichrome

Experiments to reduce the cost of nichrome led to the appearance of ferronichromes, in which part of Ni is replaced by Fe. The most successful composition was 25% Fe, 60% Ni, 15% Cr. Operational resistance of ferronichromes is lower, therefore the latter are used at a lower temperature. Nichrome and ferronichromes have significant heat resistance in combination with significant electrical resistance. They are the 2 most important classes of alloys for the production of high temperature electric heater wires. Nichrome, doped with silicon (up to 1.5%) with micro additives of rare earth, alkaline earth metals are calculated at temperatures up to 1200 ° C. Alloys Ni + 4% Al + 15−30% Cr (fechrali) are even more heat resistant.

However, a homogeneous mass of them is more difficult to obtain, in this difficult production of thin filaments and bands for electric heaters. Of fekhrali produce heat-resistant parts that are not subject to high mechanical stress.

This high-temperature Ni + Cr + Ti + Al alloy began producing Great Britain at the end of World War II for the needs of jet aircraft. The basis of the alloy is nichrome X20H80, doped with 2.5% titanium and 1.2% aluminum. Nimonics proved to be more suitable for operation at high temperatures than heat-resistant steels that lost their serviceability above 800 ° C in the nozzle of gas turbine engines. In a few years, a large number of variants of nimonics with an operating temperature of 850−1000 ° C were created. The complication of doping (tungsten, molybdenum, niobium, hafnium) gives a less uniform structure, which complicates the processing of the alloy by pressure. Therefore, the foundries of nimonik, which can be more alloyed, and consequently, more heat resistant (up to 1050 ° C), are the most widely used.

For work in highly aggressive mineral acid environments at boiling point, Ni-Mo or Ni-Cr-Mo alloys known abroad as Hastelloy are widely used. These alloys exceed all the known steels for corrosion resistance in corrosive environments.

Buy at the best price

The company «_" sells nickel alloys at the best price from the manufacturer. The level of service and product quality are at the European level. Our site contains the most prompt information. Our managers are always happy to help with product selection. The orders take minimal time. Discounts.