The lunar relief is rich in calcium, titanium and tin 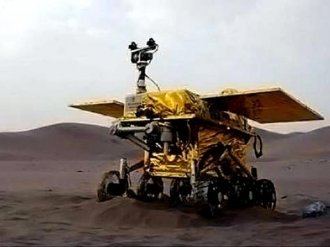 The study of the lunar surface has been going on for a long time, but it has not been possible to fully study this planet to this day. Scientists are faced with new and new riddles of outer space, which are sometimes capable of stalling even the best minds of our planet. Today China is quite active in this sphere. Against the backdrop of the rapid and rapid development of Chinese industry, the exploration of outer space could not but arouse close interest among Eastern scholars. The latest model of the new Lunokhod with a fully automated control system called the "Jade Hare" was sent by Chinese researchers for a detailed study of the lunar relief and fixing the necessary information for humanity. However, the tests of the car did not go smoothly because of the complex composition of the lunar surface. The presence in the upper layer of this planet of a whole complex of various metals such as titanium, aluminum, magnesium, chromium, iron, and much more has had a very unfavorable effect on the most modern mechanisms of unique lunar vehicles.

A detailed check of the device began after the specialists noticed the first malfunctions of their equipment at the level of the mechanical control complex. All faults could be found and eliminated before the device switched to sleep mode. This state of the machine is designed for night time on the moon. Lunokhod of Chinese production is the first car of a similar level developed after similar Soviet vehicles. The main purpose of sending such a mechanism to another planet is complete geological exploration. The machine should take samples of the lunar relief and study as closely as possible the composition of the surface layer of the Moon. Supposedly the term of such reconnaissance is calculated for three months of continuous operation of the Lunokhod. X-ray spectrometer, developed by the best Chinese scientists, will determine the detailed chemical composition of a particular breed. Even the first sample allowed to determine the presence of titanium, aluminum, potassium, iron and magnesium in the composition of the lunar relief. Also, the surface of the planet contains small amounts of strontium, zirconium and yttrium. The subsequent use of the Chinese lunar rover will allow a very detailed study of the chemical composition of the planet and use the data obtained for scientific purposes.