The global copper market is watching its surplus 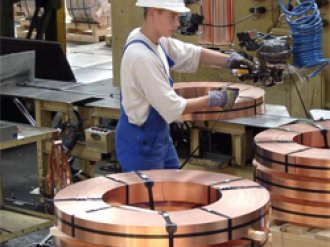 The World Bureau of Metals Statistics published a report on the metal balance for the first half of the year 2015. The copper surplus for the indicated period is 151,000 tons. At the same time, for the full year of 2014, the surplus of red metal in the world market reached 295,000 tons. The global mine production for the six-month period reached a volume of 9.45 million. Tons. Compared to the same period last year, production volumes increased by 3.8%. The global production of refined copper increased by 2.4% compared to 2014. The output of copper from the PRC increased by 161,000 tons during the period under review. The EU-28 region increased its indicators by 0.5% in half a year. India also shows an increase in production indicators. In January-June 2015, the output increased by 48,000 tons.

World demand for copper in January-June reached 11,099 million tons. This result is only slightly higher than last year's figures of 11.231 million tons. Growth, thus, was 1.18%. At the same time, consumption from the PRC sharply went down, amounting to 5.337 million tons. But even with such a significant decline, China consumes about 48.1% of global demand. On the contrary, the EU-28 is increasing demand. Compared with last year's figures - 1.783 million tons - the growth reached 6.8%. In accordance with the data provided, copper reserves for the first half of the year increased by 93,000 tons compared to 2014.

Meanwhile, Chile, the largest producer of metal, reduces volumes of exported copper . According to statistics published by the Central Bank, copper exports fell by almost 24% in annual terms. The cost of exported volumes for the month reached 2.398 billion USD. In 2014, the monthly export value amounted to 3.171 billion USD. Not surprisingly, exports are falling, given such low prices. In July, the cost of 1 pound of metal averaged 2.48 USD. This figure is almost 23% below the July 2014 price of 3.22 USD / pound. Export of cathode copper fell by almost 19%, reaching 1.102 billion USD. Export of copper concentrate fell by 23% to USD 1.023 billion.